The Government Accountability Office (GAO) recently issued its Annual Report to Congress, which provides statistics concerning bid protest filings for Fiscal Year (FY) 2020, including the number of protests filed and sustained. The chart below, included in GAO's Annual Report, summarizes this information. 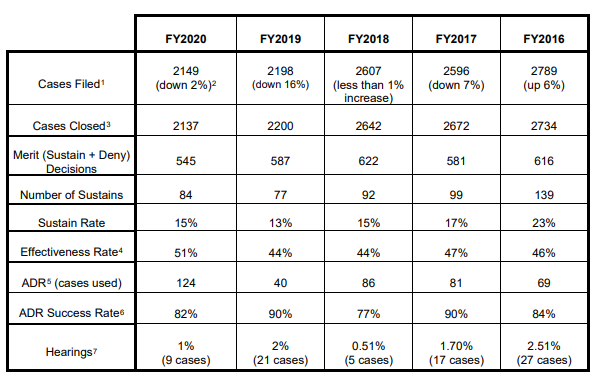 As shown above, most of the data points remained constant from the prior year. However, the Annual Report shows a steep increase in the number of protests resolved through alternative dispute resolution (ADR). ADR is also known as outcome prediction at GAO. During ADR, the GAO case attorney assigned to the protest discusses the strengths and weaknesses of each party's arguments with the parties to the protest. ADR often results in the agency taking corrective action or the protester withdrawing the protest. If either event occurs, no decision is issued by GAO. The sharp increase in the number of cases in which ADR was used this year suggests that agencies and protesters have become more open to resolving protests without a formal written decision.

As stated in the Annual Report, the most prevalent grounds for sustaining protests during FY 2020 were: (1) unreasonable technical evaluation; (2) flawed solicitation; (3) unreasonable cost or price evaluation; and (4) unreasonable past performance evaluation. The fact that a flawed solicitation was the second most prevalent ground for sustaining a protest this year is notable, as it indicates that pre-award protests alleging solicitation improprieties were more successful than typically seen. On the other hand, the fact that a flawed source selection decision was not listed as one of the most common bases for sustaining a protest suggests challenges to best value tradeoff determinations may have been harder to show than in years past.

Contractors should keep this information in mind when assessing whether to file a protest. For example, in the post-award context, if the debriefing or brief explanation of the award indicates that there were errors in the technical evaluation, cost/price evaluation, or past performance evaluation, these grounds may be a more compelling reason to protest. In addition to increasing the likelihood that GAO will sustain the protest, those types of errors in the procurement file may also cause the agency to rethink their decision and take corrective action.

If you are interested in filing a pre-award protest or were not selected for award and are considering a bid protest, please contact the MMM Government Contracts group.